Happy New Year to Everyone!

It’s been another wild year for MVP, and I am confident things will continue to flourish for MVP in the years to come. While markets have cooled down, MVP’s growth remains strong, and we strive to make as big of an impact as we can with our ever-improving products.

As we transitioned our production in-house in 2019, we completely revamped the way discs were molded to be more suitable for our new modern equipment and processes. These revamped processes considered the knowledge we have earned over the 10 years of making discs, in addition to a number of years of working in the plastics industry before we started MVP.

Many of you have observed that, in general, our discs started molding flatter than when they were produced by our previous molder. Why is that? That is because, in general, discs molded flatter are much more consistent than discs molded with dome. There are many other factors for this phenomenon, but the biggest factor would be the way the disc is cooled after molding.

To visualize this process, imagine a flexible pool noodle being squeezed inward from both ends. The inward force is going to cause the noodle to bend in the direction in which it’s already slightly bent. This same phenomenon is how dome occurs in a disc, except it’s just a circular shape instead of a linear shape. When this phenomenon occurs in a disc, we’re bound to the laws of physics and outside variables of the cooling process, so we have very little control over how the geometry changes in the disc.

As many of you know, we pride ourselves on our mindset of continuous improvement and taking feedback constructively to improve our products. Many have addressed concerns that the increasingly flatter molds have become more overstable than the previously molded counterparts. While we strongly embrace the changes that took place in the name of long-term consistency over short-term changes, we do greatly value the feedback that everyone has provided. Therefore, we will be reviewing the dimensional standards of the lineup and working towards redefining standards that are closer to how the discs were originally molded by our previous molder.

This process is a double-edged sword, however. The closer that we try to work toward how our discs were originally molded, it will inherently be a more inconsistent process because it requires more “outside-the-mold” molding. However, with the number of additional climate control technologies we have implemented in recent years, we are confident that we will be able to find a balance of molding discs closer to how they were originally molded, all while still preserving a high level of consistency.

We have developed custom measuring equipment specifically designed for effectively taking measurements of discs including dome height, parting line height, and flight plate thickness. We archive a “first part” and “last part” sample from every production run we do, as well as conduct regular measurements on every shift throughout the production run. The “first part” and “last part” samples are essential at verifying that no changes have taken place in the middle of a production run. We have a quality team dedicated to taking measurements around the clock. Therefore, if there is ever an issue with a production run falling out of specification, our team will find it immediately.

There are other factors to keep in mind that have contributed to the misperception of MVP’s consistency. One of the biggest factors is that we produce significantly more production runs now than we previously did in our history. We produced more discs in the previous 1 year than what our previous molder produced in the 10 years of producing our discs. Our inventory turns over multiple times per year, whereas previous production runs would sit in inventory for more than a year, thereby creating a misperceived sense of run-to-run consistency. In reality, if the 10 years of prior production were compared to the recent 1 year of production, there would be significantly greater consistency of the product we’ve produced in the last year than the culmination of 10 years prior.

That’s not to say that consistency has suffered in the previous 1 year, but rather the typical run-to-run variances experienced from different lots of materials from our suppliers can be observed in a shorter window of time (i.e months) than previously (i.e. years). With the accelerated rate our inventory turns, it has enabled us to significantly increase the rate of continuous process improvement and be more nimble with the ever-changing conditions we were faced with from our material suppliers.

This was further exacerbated by the ongoing supply chain crisis that was proportionately bad across the plastics industry in the last 2 years. In order to meet demand, we had to procure plastics from many different sources, because there was not a single standalone source that could meet our demand. In fact, one of our polymer suppliers admitted to us that MVP was a “Top 10” customer in North America, and they were only able to supply a fraction of our needs in 2021 and early 2022. Our highly redundant supply chain enabled us to best meet demand in 2021 compared to the other disc golf manufacturers, and I sense that MVP was the first manufacturer to “return to normal” when it comes to having the majority of our line of discs back in stock.

Different plastics sourced from different sources will inherently have different qualities. Despite the headwinds of the supply chain crisis in recent years, we have been able to maintain a higher degree of run-to-run consistency than the years prior. The supply chain for plastics has normalized to some extent, so we have been able to reduce the number of sources down to our preferred sources that offer higher quality and consistency. This will be one less headwind that we will have to deal with as we work on redefining standards in our discs.

I have seen some mentions about the changes that took place, “Why not release these as new molds?” The reason is that it’s a waste of resources to discard tooling that is perfectly functional. MVP also strives for sustainability in its processes, so we make every effort to fully utilize all scrap materials to reduce waste in the environment. This would also include tooling and other similar resources that go into our processes.

Without further ado, I wanted to share the results of one product for which we’ve redefined standards for the better: the Eclipse Lift. 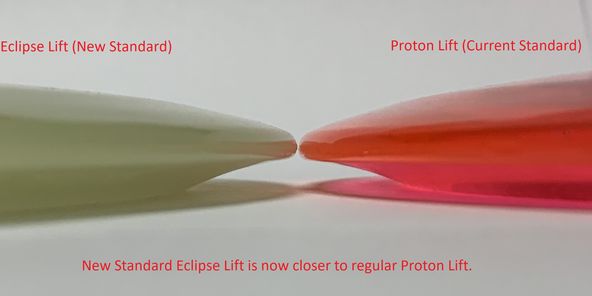 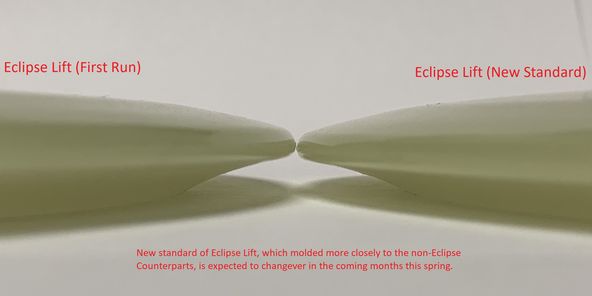 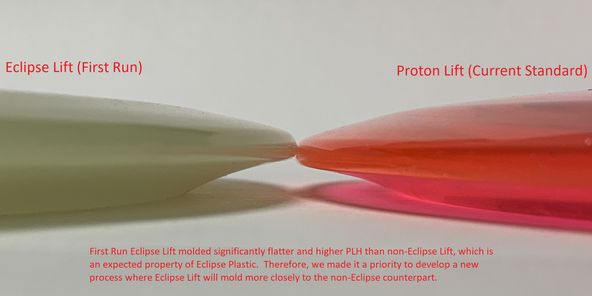 Our Glow Plastic has significantly different properties than the rest of our plastics, and as a result, tends to mold significantly flatter and more overstable than what our non-glow plastic would mold to. The Eclipse Lift would be a prime example of a disc that molded significantly flatter than its non-glow counterparts. Therefore, this model was one of our first priorities to set new dimensional standards to have it more mold similar to the Lift in our non-glow plastics. We were able to achieve a profile that looks significantly closer to the Lift in non-glow plastics. It is still molded slightly flatter and higher Parting Line Height, which is to be expected with a glow plastic, but it’s something we feel is much more representative of the Lift. We would expect the next run of Eclipse Lift to become available in the coming months this Spring as our inventory changes over.

That’s everything I have for this lab report. This will be a topic I expect to cover in future lab reports as we continue to redefine new standards over the coming months. This topic now leads me to my question for you: which discs in our lineup do you wish were molded closer to how they were originally molded? In what ways do you feel these models have changed? We take this feedback very seriously and will be very methodical in our approach to redefining our dimensional standards so that we don’t sacrifice consistency in the process.